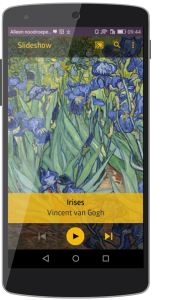 Now Android users can also use the Impasto service to decorate their living or working space with beautiful art.

The Chromecast-enabled app has over 100 000 masterpieces from the collections of the Rijksmuseum (the Netherlands) and the J.Paul Getty Museum (USA) that can be streamed directly to TV screens.

Impasto Art can also be found in the App Store and is available on KPN and UPC set-top boxes.

The new generation of robots is already here, mainly in warehouses and factories, having huge impacts on productivity and logistics. These machines are using the latest developments in software and artificial intelligence, revolutionizing the way goods are produced and distributed.

One other notable development, already transforming industries is Vision Guided Vehicles (VGVs). They are capable of transporting heavy shipments or ensuring same-day deliveries, reducing human labor costs to a minimum. On a larger scale, VGVs are already seeing use in the automotive industry and retail.
In this article we will examine three companies in the autonomous robot industry that are drawing a lot of attention. We are very much interested how these inventions will improve supply chains in different business sectors over time.

Starship Technologies is introducing autonomous robots that deal with the hardest part of the delivery process – the “last mile”. The purpose of these machines is to deliver groceries and small packages to suburban households. Operating autonomously almost the entire time, each robot will use navigation software and a camera plus radar to avoid obstructions. It will also have speakers and a microphone so real-time communication is possible. Climbing small staircases is also viable due to their six-wheel treads.

The company is planning to launch a beta program in both the US and the UK, so if everything goes as planned we might see these machines on sidewalks relatively soon.

Simbe Robotics is currently creating a tall, cylindrical robot that monitors grocery store inventory, making sure items are in the correct section, properly stocked and priced. One Tally robot can look through 15,000 items per hour, pausing only to take a high resolution pictures. The machine still cannot fix shortcomings it notices, but it transfers the data it collects to the cloud for further examination, then presents potential solutions to retailers via mobile app.

One huge advantage to this technology, which also applies for the VGVs, is that it does not require new infrastructure to do its tasks. It can also work just fine around customers and other staff members even during busy business hours. It is also programmed to go back to the charging dock when low on power.

With human population increasing every year, effectively growing, harvesting and distributing food is now a global problem. It is estimated that global population will rise with another 2 billion people by 2050. David Dorhour is working on a robot that will revolutionize agriculture.

Prospero is a small, six-legged robot, which when joined with hundreds other ones can quickly and systematically plant acres of land. It won’t be using GPS or visual guidance, it only sees directly underneath. When it detects seedless piece of soil, it plants at precise depth, sprays it with preprogrammed amount of fertilizer, covers it and sprays another fluid which lets other Prosperos know this area is already planted.
Each robot will be equipped with radio communication so when one spots larger uncultivated patch of land it can call for backup. On the same principle if it finds an already planted area it will let others know to work somewhere else.

Instead of constantly monitoring each other’s position Prospero will be using simple communication. This concept greatly reduces computational power and makes it also highly usable in rural areas. Farmers will have the total control – instead of making decisions field by field they could do it for each plant.

Even though industries tomorrow will be very altered, humans and robots will work in collaboration. Machines can excel at doing repetitive and monotonous work, but there are no replacements to human creativity and intellect.

Everyone should embrace this new technology which will lead to a brighter future. Yes, in the short run many people will lose their jobs but it is the cost of progress.