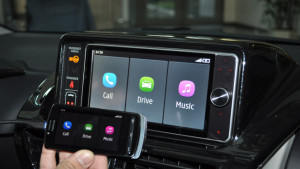 Which is the next field where Google and Apple will clash? It is estimated that by 2020 one in every 3 cars will be connected.With only few exceptions, car manufacturers have already settled on either Google or Apple for their dashboard software.

An interesting story with reference to today’s situation is something that happened to IBM – a world leader in producing computers who lost big because it lacked user-friendly graphical interface. For only five years between 1985 and 1990 users’ demand shifted drastically – people were not interested in the hardware of their machines(a core competitive advantage of IBM) as long as they were running on Windows which became an industry standard. IBM lost because it had given the user interface to Microsoft  even though the latter never created computers.

One logical question arises – is the automotive industry doing the same mistake IBM did 30 years ago? There are two polar groups of stakeholders we would like to mention. The first includes the people who love the internal combustion engine and will resist new technologies, avoiding driving smartphones on wheels. The other group are the early adopters – the ones that set trends for other users. Many of those people will be instantly in love with whatever Google or Apple create – whether it is a dashboard or a self-driving vehicle.

Either way it is up to the car manufacturers to identify and develop other ways of adding value to their products if they want to stay in business as the Silicon Valley giants are closing in.